a chronicle of recollections

Sir Henry Bartle Edward Frere was appointed the Commissioner of Sind in 1850.
He issued a decree in 1851, making it compulsory to use Sindhi language in place of Persian in Sind. The officers of Sind were ordered to learn Sindhi compulsorily to enable them to carry on day-to-day work efficiently.
He went on to become Governor of Bombay in 1862, returning to England in 1867 where he was made a Knight Grand Commander of the Order of The Star of India. 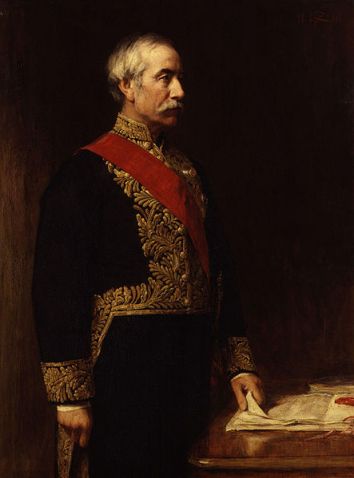 His career subsequently took him to Zanzibar, where he negotiated a treaty with the Sultan for the suppression of the slave trade, then South Africa where he was made High Commissioner. Perhaps he took on more than he bargained for….it couldn’t have been easy trying to impose an unpopular form of confederation on the region. Frere was sent to South Africa to turn this vital area into a secure bastion on the route to India, but was distracted from the task by the routine instability of the South African theatre.
He was recalled on charges of misconduct in 1880, and died in Wimbledon four years later from the effects of a severe chill.
In 1888, the Prince of Wales unveiled a statue of Frere on the Thames embankment. Mount Bartle Frere (1622m), the highest mountain in Queensland, Australia is named after him, as is a boarding house at Haileybury. A road in Parktown, Johannesburg, is also named after him. (Frere Road is also the home of Nadine Gordimer, the Nobel Prize-winning author). In Durban, there are two roads which honour him: the first, Frere Road, transforms a little later to Bartle Road.

Frere Hall in Karachi was built in his honour. The city also named a road, street and town after him.

Out of twelve designs submitted, the one by Lt. Col St. Clair Wilson was chosen and construction started in 1863. It was opened by Samuel Mansfield, the Commissioner of Sind in 1865.

The total cost of this hall was about Rs. 180,000 out of which the Government contributed Rs. 10,000 while the rest was paid for by the municipality. The style is Venetian Gothic, executed in yellowish Karachi limestone and red and gray sandstone from Jungshahi, an area rich in minerals, connected to Karachi during British rule by the North Western Railway.

(information picked out of Wikipedia)

Why did I choose to delve into this bit of history today?

It is because of a bunch of photos of old Karachi that were forwarded to me on email. I picked this picture of Frere Hall to post here today as it was the oldest in the lot.

And also because a hundred years after construction began on the site, AJ brought Mummy here in a rickshaw for their second date.

But in 49 years of being together and living in different parts of Karachi, Mummy and AJ have spent the last 22 just a stone’s throw away in this area named Frere Town after Bartle Frere.

5 thoughts on “What’s the connection between Bartle Frere, AJ and Mummy?”

Your turn to say something Cancel reply

I blog about my mum and dad and their past.